1909 DIGITAL is an academically “Evocative” brand name. It’s slightly mysterious. When done right, an evocative name should cause people to ask, “What does it mean?” Things have gone just as planned for us. The story behind 1909 DIGITAL has inspired us from day one. It has built meaning into our brand and it’s let us share our values more frequently. Often we only have the opportunity to share the surface-level story behind our name. I’m eager to dig deeper into what 1909 DIGITAL has meant to us living and working through the events of 2020 and now as we embark on 2021. 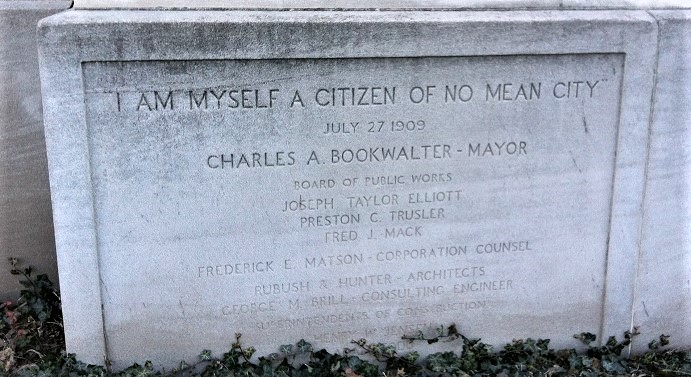 More than a quote

The main source of inspiration for our business is a quote from former Indianapolis Mayor Charles A. Bookwalter, “I am, myself, a citizen of no mean city.” This quote is inscribed on the cornerstone of Indianapolis City Hall, which was laid in 1909.

“No mean” was used frequently at the time to describe something as impressive, or not insignificant. The line itself originates from Acts 21:39, in which Paul describes his home Tarsus: “I am…a citizen of no mean city; and I implore you, permit me to speak to the people.” Not so bad, comparing Indianapolis to the home of the Apostle Paul, Cleopatra, and Mark Antony, right?

Beyond that, in 1909 “No Mean City” was the theme for Mayor Bookwalter’s political campaign. The front page of the Indy Star on July 28, 1909 showed a photo of the cornerstone ceremony with a banner hanging above the Mayor that reads, “Stand up for Indianapolis. No Mean City.”

Juxtaposing then and now

There’s something about placing opposite ideas side-by-side that’s intriguing. We weren’t the first to bring the idea of Indy being “No mean city” into the present day. The quote saw a resurgence as a community touchstone for LGBTQIA rights in the wake of the 2015 RFRA legislation and resulting “Indy Welcomes All” campaign. It was at that point that Indy being “No mean city” took on a whole new meaning. We are literally not “mean,” and all are welcome here.

Because other local groups have used the phrase for publications and initiatives, we chose its historically significant year for our brand name—1909. But it’s essential that we invoke the idea that contemporary and future ideals are our priority. This is why 1909 DIGITAL came to be. We’re proud of our humble Hoosier roots and also focused on the progress of our time, digitally and otherwise.

The first year of our business coincides with a year no one will soon forget. At its worst, 2020 has numbed us to increasingly dire news and has normalized grief. At its best, the digital distance has humanized us and brought people closer together. Our core value is to be transparent and authentic humans. We’ve built a true “work fam” to keep us sane.

At the same time, we were deeply impacted by the progress and pushback resulting from Black Lives Matter and other BIPOC initiatives. As a business and on a personal level, there is power in understanding what you don’t know, in realizing that reactive response is not enough, and in learning what actions to take to truly make a difference. Most importantly, we’ll never stop learning.

I’m trying to do my part to take a second look from another less privileged perspective. In looking at the July 27, 1909 Indy Star photo of Mayor Bookwalter’s cornerstone-laying ceremony, it’s easy to see the exuberance and hope in the crowd. Look again and you’ll see that the crowd is made up of only white faces. We appreciate the positive connotations of Mayor Bookwalter’s 1909 “no mean city” quote. But what did that look like for the Black population in Indy at the time? 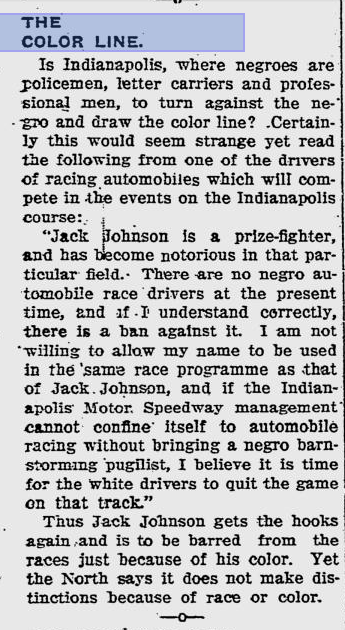 It is through this lens that I began to look specifically at what the year 1909 was like for communities of color in Indianapolis. To truly understand the significance of our company’s namesake, we need a full, rich context. Not just the whitewashed front pages of the early 20th century. Here’s what I found: 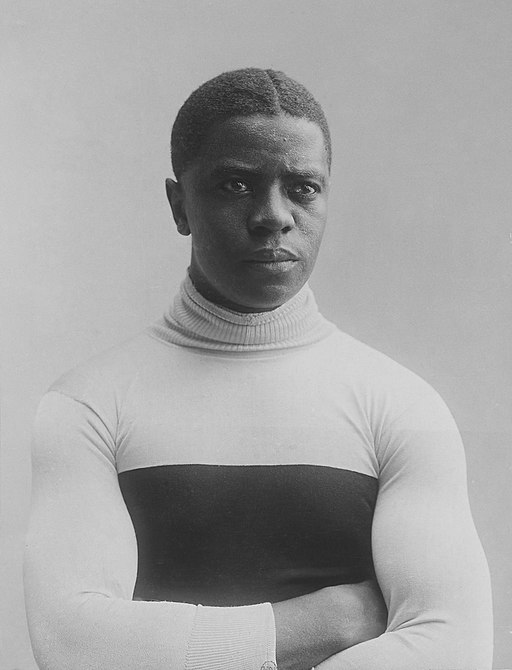 So let’s go back to that phrase that Indianapolis Mayor Bookwalter stated on July 27, 1909: “I am, myself, a citizen of no mean city.” The quote survives from a time before things got a lot worse: before the revival of the KKK, before the term “redlining” existed, before mass incarceration, and many other atrocities. It lives in a time before things started improving: before Martin Luther King, Jr. had a dream, before interracial marriage was legalized, before our first Black president, before Black Lives Matter became a spoken mantra. Indianapolis has seen progress. Indianapolis still has a long way to go. That’s the juxtaposition. The good and the bad. The past and the future. It’s our job to move forward with eyes open.

The text and photos of this website are released under cc by-sa 4.0

We’re located in Indianapolis on land which is currently occupied and is the ancestral territory of the Miami, Shawnee, and Potawatomi people.

This site uses cookies. By continuing to browse the site, you are agreeing to our use of cookies.

We may request cookies to be set on your device. We use cookies to let us know when you visit our websites, how you interact with us, to enrich your user experience, and to customize your relationship with our website.

Click on the different category headings to find out more. You can also change some of your preferences. Note that blocking some types of cookies may impact your experience on our websites and the services we are able to offer.

These cookies are strictly necessary to provide you with services available through our website and to use some of its features.

Because these cookies are strictly necessary to deliver the website, refuseing them will have impact how our site functions. You always can block or delete cookies by changing your browser settings and force blocking all cookies on this website. But this will always prompt you to accept/refuse cookies when revisiting our site.

We fully respect if you want to refuse cookies but to avoid asking you again and again kindly allow us to store a cookie for that. You are free to opt out any time or opt in for other cookies to get a better experience. If you refuse cookies we will remove all set cookies in our domain.

We provide you with a list of stored cookies on your computer in our domain so you can check what we stored. Due to security reasons we are not able to show or modify cookies from other domains. You can check these in your browser security settings.

We also use different external services like Google Webfonts, Google Maps, and external Video providers. Since these providers may collect personal data like your IP address we allow you to block them here. Please be aware that this might heavily reduce the functionality and appearance of our site. Changes will take effect once you reload the page.